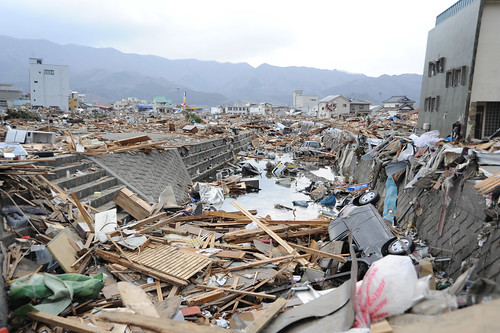 I don’t get the theological connection that some attempt to make between natural disasters such as earthquakes, tsunamis and the like and God. Without disrespect intended to my parents and other many others from former generations, I acknowledge that I had parents who made us shut everything off and sit quietly when storms arose because in their words “God was talking.” In essence these words and this practice lead me to believe that when natural storms or disasters occur, God is trying to get through to us and that He had to cause such destruction in order for us to pay attention.

I wonder why God is our default when tragedy strikes. Why is it that some believe that God – through natural storms, is doing so to punish the people he created? Church leaders and political commentators alike embrace the belief that we are in trouble with God, thus the earthquake. Earlier this week Glen Beck alluded to his belief that the earthquake in Japan was a “message from God” to get people to clean up their act. And sadly, a few Jesus followers would agree.

After all Jesus did say that earthquakes would come – that was His prediction many years ago. Maybe the fact that Jesus said when we see these things (earthquakes) taking place we should have a heightened awareness that we are moving closer to His return, is not about his causing these things in order to communicate the message of His return.

Maybe He mentioned it to communicate His awareness of how messed up His creation is and announce His desire to rescue us from this chaos. Maybe His love for us is so deep that He weeps when He sees the destruction that these disasters cause… and maybe He anticipates an end to the pain even more than we do.

What Jesus did not say was that “I will cause earthquakes to occur.” There is a difference! Deep within us is a desire for answers to the question of “why?” Why this, why them, why now? The longing for answers to the unexplainable and intensely painful is part of the human experience. But I have lived long enough to know that the “why” question is not always answerable. Sometimes, it’s just more helpful to ask “what next?”

Unfortunately, many of those who blame the behavior or “sin” of people who experience calamities are not as likely to give equal energy to extending a hand of help, resources, or prayers and reaching out to help people pick up the broken pieces and start over. Grieving with those who grieve is also something that we are instructed to do.

I can keep it real and say that yes, I find myself a bit annoyed when I hear pronouncements of judgment regarding those who are in pain/suffering through natural disaster. In essence I believe that people have multiple foundational beliefs about who God is, and from those foundational views we build ideas and explanations regarding what is accurate. For some, God is nothing more than a strict disciplinarian who will beat us down if we stray from the path He desires. I used to believe that way (I think), but today I believe that God is loving, God is just/fair, and that God is good. Are there consequences for wrong actions – of course there are, but are natural disasters punishment/consequence for human behavior/wrong action/sin? This writer believes that the answer is no.

What do you say?